In this quiz, we will be focussing on current electricity which we use daily for charging up electr...
Try quiz

In this quiz, we will be focussing more on current electricity which as earlier seen we use daily fo...
Try quiz

Particles that groups electric charge are called charge transporters. Now, students usually think that current and electricity are the same but they are not the same thing. Current is a general characteristic of electricity, like voltage and resistance. Current is a name given to the flow of charge through a medium. Electricity is general name that is utilized for the basic progression of energy to control all the electrical gadgets and Current when all is said in done alludes to any stream.

The SI unit of electric flow is the ampere (A) and the ordinary image for flow is I. To know more about charge carriers and electrostatic forces, click HERE

Current Electricity can also be classified as direct current or alternating current based on the voltage source.

Our quizzes here at gcequiz.com are going to focus on all of these aspects. So if you want to test yourself to know how good you are in Current electricity, select a quiz below and start testing yourself  and improving on what you know. Visit A Level Physics if you wish to change the topic. The quizzes here are to help you to  improve on what you know about physics current electricity and all our quizzes are free of charge. With all that said, are you confident to answer all our quizzes? if yes then try them below. 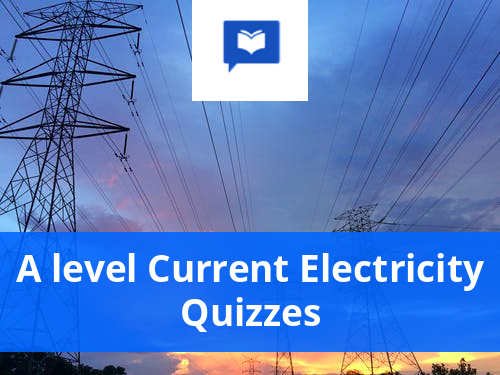